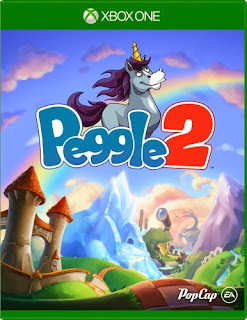 Today, the follow-up to the classic Xbox Live Arcade puzzle game "Peggle" (2009) is being released for Xbox One.  This title is a timed-exclusive on the X1, meaning that for the moment it's only available on the Xbox One but other platforms will also have it a later time.

As far as game design changes go, this new version now implements Kinect support, allowing players to shoot using their hands and voice.  A new mode is also introduced, called "Peg Party" that allows up to 4 players to compete against each other.  Gamer points addicts will also love that 1000 points are available to unlock in this game.